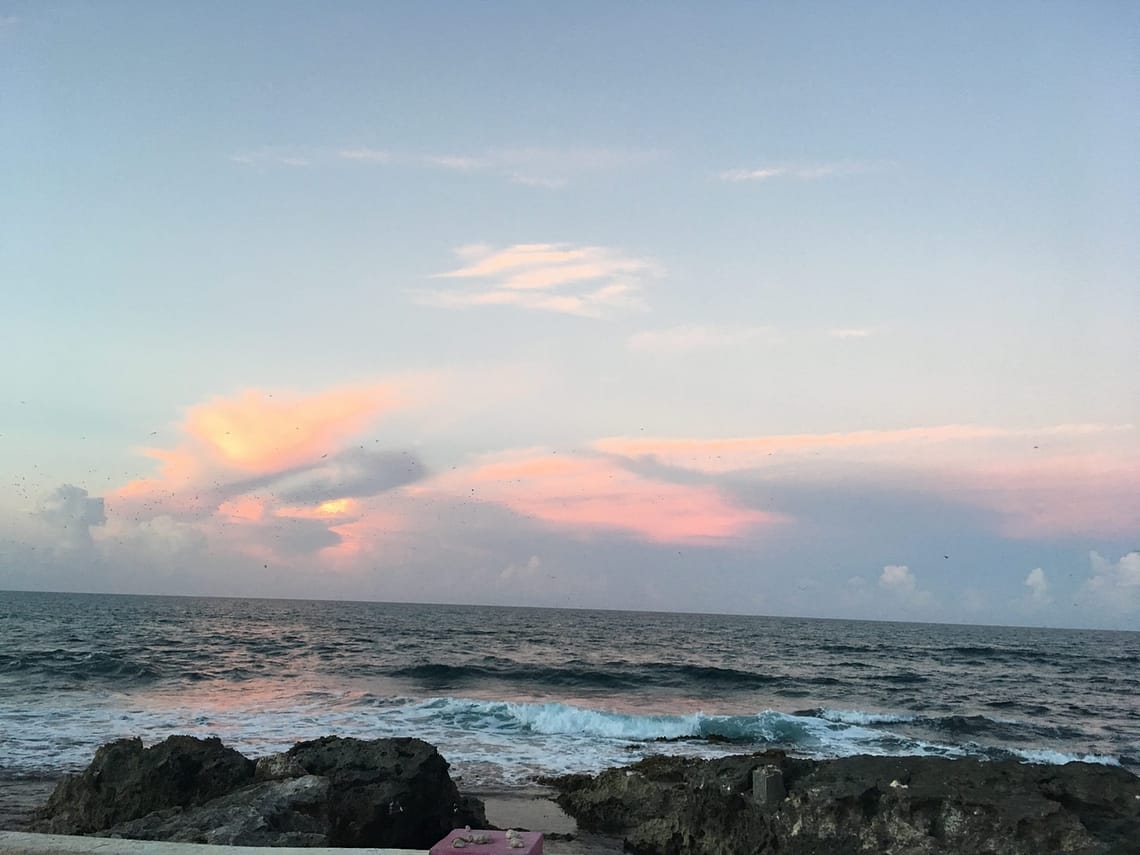 Isla Mujeres is this adorable island just off the coast of Cancun, Mexico.  In my opinion, there are many more than 5, but here are some reasons why I think you should visit Isla Mujeres! After landing in the airport, we took about a 30-minute ferry ride over to the island. The water was a little choppy and I was exhausted from getting up at 3 am, so I felt a little sick on the very crowded boat.  Luckily, we were able to squish into a row kind of in the middle of the boat to help limit the seasickness. The ferry docks in the main shopping area on the island.

Outside, the street is full of shops for the tourists to peruse around. We didn’t do much souvenir shopping on this trip, but we did end up walking back down to this area another day to get a couple of things for my nieces and nephew. It was nice because the distance from the hotel area to the shopping area was walkable, but also seemed like two completely different parts of the island. So, now that we’re on the island, let me tell you a couple of reasons you should visit Isla Mujeres!

The Size of Isla Mujeres

When you visit the island of Isla Mujeres you’ll quickly realize it is not very large, and I felt completely safe the entire time!  In fact, the island is only about 4.3 miles long. It was nice because the distance from the hotel area to the shopping area was walkable, but also seemed like two completely different parts of the island.  The hotel we stayed at was kind of like its own island off the island, which added to the secluded and safe feeling.

However, because the Isla Mujeres is so small, but has been growing in population (visitors and residents), there were occasionally a few times when the power would go out because the system was overloaded. It was just kind of normal. It never stayed off for too long, hardly noticeable really, especially if you’re out exploring anyway! A pretty cool thing about the island is one of the best ways to get around is to rent a golf cart!

Getting to the hotel there was only one bridge to it over a shallow area of water. As we drove across you could look out and see snorkels and heads bobbing up and down on both sides. To the left, you could see a beautiful beach. It’s known as Playa Norte and has been identified as one of the best beaches in Mexico. It is a beautiful white sand beach next to clear turquoise waters.  Not too far off the beach, you’ll see lots of boats anchored with people jumping off into the water and having a great day. Honestly, as someone in the hotel and at the beach area, the boats were probably the thing I liked least, but with sand in my toes could I really complain? Plus, the beach and water truly were beautiful!

The view from our room overlooked the water below and out to the ocean.  The water was so incredibly clear that we could see the fish swimming around down there. The awesome part about this place is that you only have to walk outside to go snorkeling. Since I’m someone that tends to spend most of my time above water, this was great for me. I loved being able to slowly dip my toe back into snorkeling. The water was pretty shallow in most places, so even though there was a good current coming in, you could stand up a lot of the time as well. There were so many cool fish! Different colors. Different sizes. Loners. Schools. I loved being able to see a little bit of their world!

Something that has been on my bucket list is swimming with dolphins. Luckily for me, there was a place on the island, Dolphin Discovery, where you could do that. They used the saying, to know is to love. Meaning they wanted you to know the animals so you would love them and be more aware of the things we can do to help protect their natural environments.

So, to the fun stuff! First, we hung out with Zazu, a sea lion! He is very fun, energetic, and food motivated (I mean, aren’t we all)! After learning about him, we posed for pictures. One of him kissing our cheek and then a fun one. For me, we were both sticking our tongues out! He gets me. 😉 Then we saw the manatees. Unfortunately, I don’t remember their names. However, I do remember they kept nudging my legs and there were multiple times I thought they were going to push me off of the little landing we were on.

Now it’s time for the dolphins!  I love watching dolphins play in the water. Every year when we’re out in North Carolina we’ll see them swimming along. But to be right next to them while they were swimming around and jumping was awesome! We got kisses from them, held on to the dorsal fin of two of them while we swam (okay they pulled me) across the water, we even got to be pushed up into the air with a dolphin at each foot. Ah-maz-ing! It was so cool to be right there with them. Such beautiful creatures that I’ve adored from afar for so long!

I can not say enough about the whale sharks! In fact, I have a whole other post just about that experience, and that doesn’t even do it justice! Being able to go swimming with these magnificent creatures was just life-changing for me!  If you’re able to go down sometime between May and September, I highly recommend looking into doing this! (Read more about that here.)

The visit to Isla Mujeres wasn’t long, but it was definitely full of moments that I will never forget! I look forward to going back sometime soon too. Now that I’ve conquered that fear of the deep blue water, I would really love to swim with the whale sharks again, and I’m sure there are other things around the island that I can still explore. It is so simple to get to, and with the way it is set up, it’s honestly great for families, so I’m hoping we’ll be able to get either of my brothers’ families to go down once too.

Travel Budget: How to Plan for Your Trip

15 Places to Visit on Your Chicago Trip