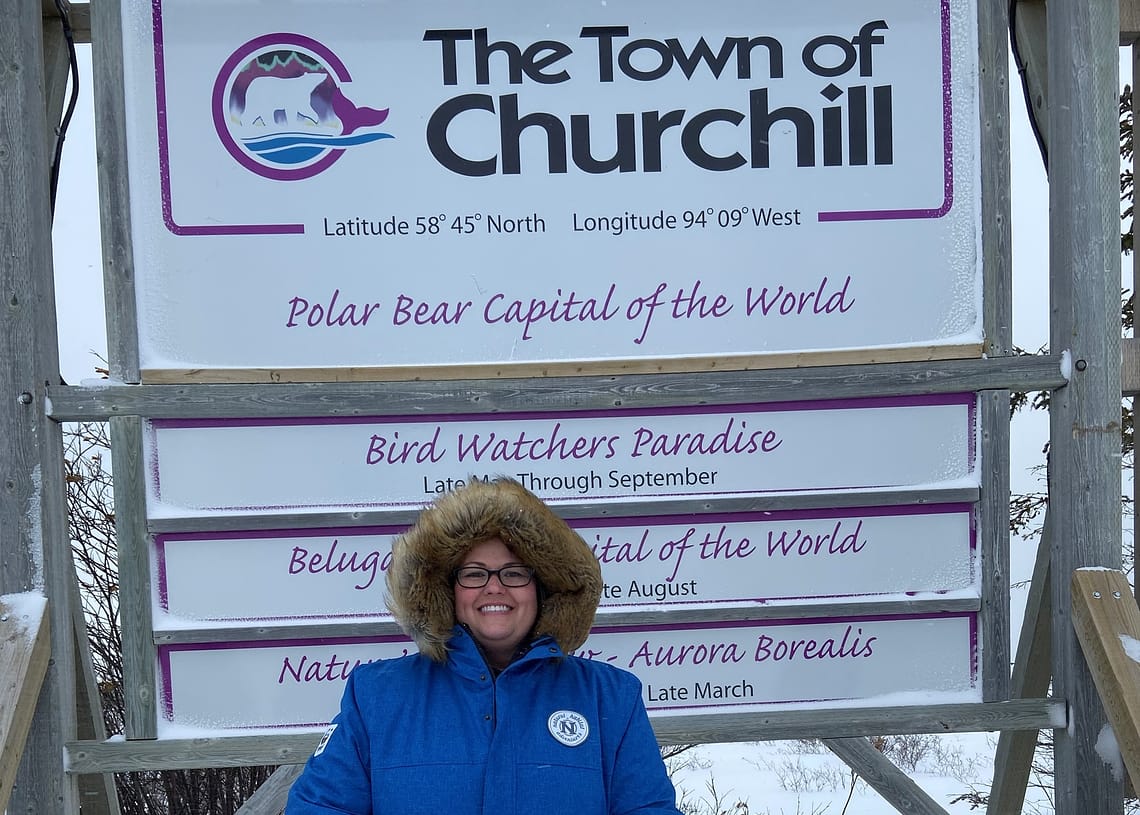 This year I had the opportunity to explore Churchill, an area that not many get a chance to.  It’s located way up north in Canada, just off the Hudson Bay. We went up there specifically to see polar bears in their natural habitats.  This small town has about 900 residents, but the population increases greatly during the bear season with the tourists that come in (not to mention the bears!).  Its nickname is the ‘Polar Bear Capital of the World‘.  This town is also a great place to go to see Beluga Whales and the Northern Lights, but we went for the bears! However, getting to explore Churchill was an added bonus!

The Bears Come for the Ice

The reason so many bears make their way here is due to the way the currents in the bay flow that helps make this the first place where the ice starts forming. The river also begins to create pieces of ice that it essentially spits out into the bay. So, with the ice forming here first, the bears migrate here to start getting out on the sea ice for the winter.

How to Get to Churchill

There aren’t many ways to get to Churchill. Really just plane, train or boat. Unfortunately, in 2017, the rail tracks were washed out by flooding, so trains did not operate to Churchill again until November of 2018. Obviously, the boat option is a little more limited in those winter months, and there are only two airlines that fly into Churchill. The airport itself used to be a military base and has a rather long runway. When we landed it felt like he was never going to hit the brakes.

When you explore Churchill, you really shouldn’t be out walking around town by yourself. If you are going to be, obviously during daylight is ideal, and stay within the limits. There are signs that tell you to STOP, don’t walk beyond these points. I recommend following that rule! When bears enter the town, and they do, people shoot off these cracker warnings to try to scare the bear away and notify people around them. Every day we were there, a bear came into town!  I never felt in danger, but you definitely had to be more aware of your surroundings! Honestly, I kept hoping we would open the curtains one morning and see a bear just hanging out in the parking lot.

Our guide had mentioned that if you were outside and did come across a bear, pretty much everyone left their doors unlocked so you could run in if you needed to. I also remember reading somewhere that it was illegal to lock your car doors, for the same purpose, but I forgot to ask our guide for confirmation on that.

There are only a handful of hotels in Churchill, and they do fill up! If for some reason you decide you don’t want to do a tour like we did (more to come), but just come up yourself, beds are limited! The hotels aren’t fancy or anything, but they were better than I had expected. We stayed at the Churchill Hotel and had a tv, coffee maker, and fridge in our own room, which was great. Oh, and we had WiFi!  There was a restaurant attached to our hotel, and that is where our group had breakfasts. I didn’t usually eat breakfast so I can’t attest to how tasty it was, but everything looked delicious.

Sleeping in the Tundra in Churchill

If you are going up there with a tour group, you might have the option to book your tour to allow you to stay out on the tundra. We decided not to do this, but we met some that did.  The cool thing about this option is that you are right there in the middle of the bear’s territory. You can literally look outside the window by your bed and possibly see a bear.  The tundra lodges are these large vehicles similar to train cars. There are two sleeping cars, a dining car, and a lounge car and they’re all connected with a little deck between them that you can stand out on to get a little closer to the bears.

Learn More About Peace and Fur When You Explore Churchill

For such a remote and small town, I was pleasantly surprised to hear about the rich history in the area.  The Cree, Dene, and Inuit were the main original inhabitants.  We heard an amazing story of a young lady named Thanadelthur.  In the early 1700s, there was a lot of hostility between the Chipewyan and Cree people.  In 1713 there was an attack on the Chipewyan people by the Cree, during which they took many hostages.  One of those hostages was Thanadelthur, who would have been around 16 years old at the time.

After a few months, she was able to escape with someone else, but sadly her companion passed away on their journey back to their people.  While Thanadelthur continued her journey, she came across some hunters for the Hudson Bay Company. LONG story short (but you can, and should, read more about it here) she ended up being instrumental in getting the Cree and Chipewyan to form a truce.  Unfortunately, she passed away about a year later, around the age of 20.  TWENTY!  What had you accomplished by that age?

We learned a lot about the Prince of Wales Fort, the Hudson Bay Company, and the fur trade in the area.  But also, from more recent history, this was an active area during World War II and the Cold War.  Just outside the town was the Churchill Rocket Research Range where they would conduct atmospheric research.  However, we heard a couple of people make jokes while we were there about them actually using the area to spy on the Russians.  Who knows?  It’s really cool though because you can still see where they would launch the rockets from.

There is Lots of Diversity to Explore in Churchill

Another awesome explore Churchill is that it has three different biomes: marine, boreal forest, and tundra. That being said, while I mentioned it’s a very popular location for polar bears, both black bears, and grizzly bears can be found around the area as well. You could also see caribou, wolves, or moose on land.  In the Hudson Bay you could find beluga whales, ringed, bearded or Greenland seals, or narwhals.  In the northern waters, you could also see walrus, dolphins, and killer whales.

In addition to the bear viewing and learning about the town, we were able to have some other amazing adventures while we explored Churchill. One awesome thing we got to do was a dog sled ride in the Boreal Forest. Our group had an amazing encounter during this excursion. In 25 years the guide who does multiple runs a day, especially during bear season, hadn’t had a bear issue. Leave it to our group to break that.

Shortly after the first two sleds took off we heard someone yelling. One of the guides by us took off running only to come back yelling ‘gun’! At this point, the rest of our group is ushered back onto the shuttle for safety and we really don’t have any idea what’s going on. They take off with a gun on a 4-wheeler and then we hear two shots go off.

Don’t worry, no bears or humans were hurt! The gunshots were simply to scare off the polar bear that had popped up on his back two legs when one of the sleds got close too where he had been. Talk about an intense situation for the people on those sleds (not gonna lie though, wish I had been on one). We proceeded to go on our rides after that, and what a magical experience that was!!

Take a Helicopter Ride to Explore Churchill from Above

Something that I was SUPER excited about was that we got to go on a helicopter ride. Unfortunately, the day we were scheduled to go the visibility was rather bad so they were grounded. Luckily, on our last day in town, we were able to go up! It was so awesome!! Yes, I was super excited plain and simply to be in a helicopter, but the views were amazing!

There is so much diversity in and around this small town. The diversity between people, animals, and sea life, and even among just the type of land you’re standing on.  While we went to see the bears, I’m glad we had a chance to spend some time to explore Churchill and learn more about the history of it.

Have you ever heard of this town?  Would you like to explore Churchill?