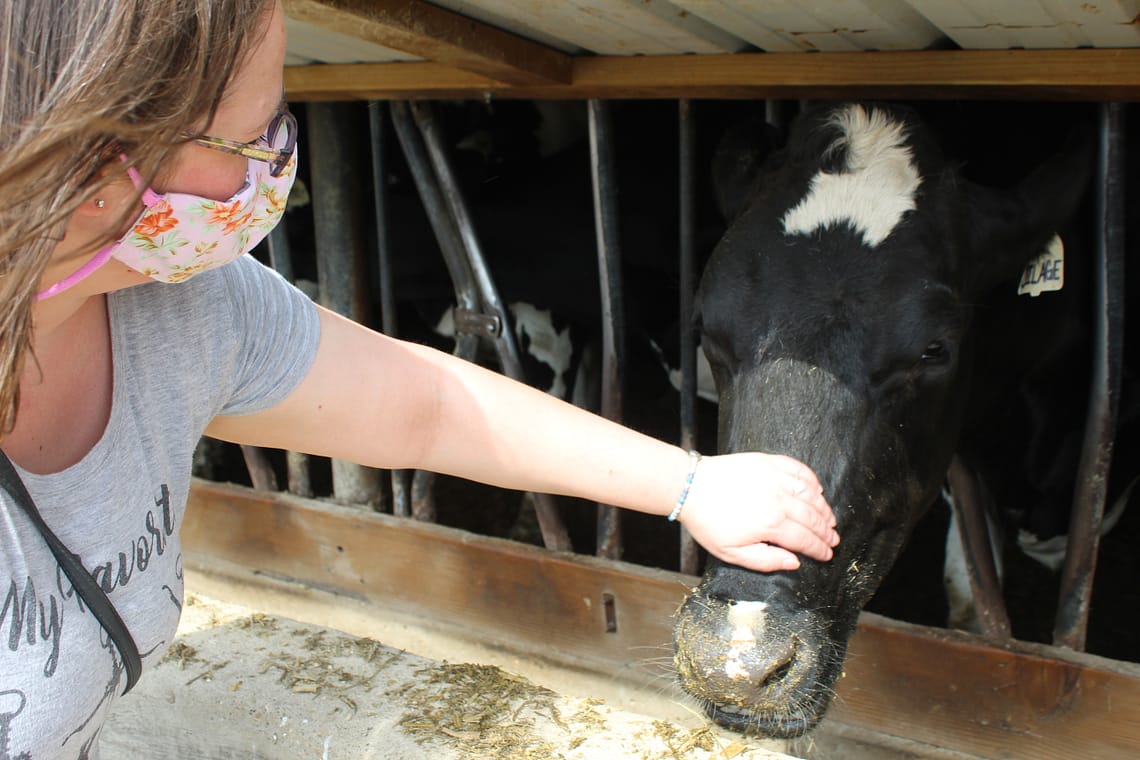 A few months back I found out about Hansen’s Dairy Farm which is located near Waterloo, Iowa.  Obviously, it’s a dairy farm so there are cows and you get a chance to milk them and feed them. However, one very unique thing about this place was that there were kangaroos. I mean, they’re not a part of the dairy process or anything. One owner has some they incorporate into the tours, and that’s really why I wanted to visit if I’m being honest. I’ve lived in Iowa for 38 years so I’ve been around my share of cows. However, I’ve only ever dreamt of going to Australia to see koalas and kangaroos. Since that obviously isn’t going to be able to happen this year, I needed to visit this dairy farm! (This is NOT a sponsored post!)

When my brother came to visit for a week, I figured it was a great opportunity to visit the farm! I knew my nieces would enjoy seeing the cows because that’s not something you really get to do in Chicago often, and I knew the kangaroos would be the icing on the cake for both of us! So, I got us tickets for the Hands-On Tour! The tour was going to show us how things worked on the farm, allow us to actually milk a cow, bottle feed baby cows, and, of course, see the kangaroos.  Then we would also get a chance to make butter and try some delicious ice cream!

So, a little about the farm.  This farm has been in the family since 1864 with the fifth, sixth and seventh-generations working on it now. The fifth-generation has four sons and the jobs around the farm are split between them. One delivers the products, one makes the products in the creamery, one manages the crops and cow nutrition and the last one milks and cares for the cows.

They have 300 purebred Holsteins in their closed herd at Hansen’s Dairy Farm, with 150 being milked and 150 as fill-ins/replacements.  Each cow is named using the first letter of their mother’s name and has its own personality.  They use artificial insemination and a cow will have its first calf at 2 years old.  The cows in this herd don’t just wander around grazing on grass.  Instead, the farm grows its own food for them on their 400 acres.  The feed includes hay silage, corn silage, distillers grain, high-moisture corn, canola, and vitamins.  They are not given any growth hormones! One cow will consume 90 pounds of feed and 40 gallons of water a day. That produces about 10 gallons of milk a day from each cow.

The cows are milked twice a day, at 4:00 am and at 3:30 pm. There is a 16-stall milking parlor that the cows will walk into that allows the workers to clean their utters and attach something that will pump the milk out. In the 5 minutes it takes to empty a cows utter, they will produce about 5 gallons of milk and drop about 40 pounds! The milk will come out of the cow at 101 degrees. It’s then chilled to 38 degrees in a bulk tank until it is ready to go to the on-farm creamery.

At the creamery on Hansen’s Dairy Farm, the milk will go through a cream separator that will help clarify it and remove some fat.  They will then package the cream collected from the separator as heavy whipping cream, or use it to make butter or ice cream.  The remaining milk then gets pasteurized, which means that they heat it to 164 degrees for 15 seconds to eliminate bacteria. Now the milk is ready to be bottled!  Each week they will produce approximately 7,500 gallons of milk.  And the chocolate milk they make is especially delicious!

Now, how do they make their delicious ice cream?  First they will use the cream that was collected during the separator process and mix that with egg yolks, skim milk, sugar, non-fat dry powdered milk and a stabilizer.  The mix is then pasteurized, aged for 12 hours and then chilled to 22 degrees.  Next they’ll add in any flavors or treats to the mix.  Think mint flavor, cookie dough chunks, chocolate chunks, etc.  Then the ice cream is packaged and flash frozen to -30 degrees and distributed!  They make 20 flavors of the hard ice cream throughout the year and I love the coffee one!

So, let’s take the tour.  First, we met at the tour center for an introduction and then boarded a trolley pulled by a tractor and were taken to where the cows were.  We visited a small room that was the inside/middle of the milking parlor. (Since we took this tour during the Covid reopening time, in this small space we were required to wear masks.) While our guide explained the milking process we were able to watch the milking machines in action.  We were then given an opportunity to go down and actually milk one of the cows by hand!  After this, we saw a little of the creamery (through windows) and headed over where the cows were enjoying some delicious food.

We were told we could pet the cows’ heads.  You had to hold your hand out to let them smell you, and then very slowly move your hand up to their heads.  I got two of them to let me pet them briefly.  Then we went where the baby cows were and were able to bottle feed them.  Those babies were so hungry! I fed Mahones and she was born on May 27th (so not even a month old at this time).  Both of my nieces loved getting to hold the bottles and feed the cows, although sometimes it looked like a game of tug-o-war.

Across the way is where the babies went when they got a little older. It’s kind of like school where they get a chance to make friends and interact with the other cows their own ages.  Here they are kept in one larger pen together, share food and water, and have free stalls where they can rest.

Now, this part of the tour was what I was personally looking forward to the most.  One of the sons, Blake, fell in love with the Kangaroos and Wallabies when he visited Australia. He then purchased some Wallabies from New Zealand to come and live with his family at the farm. After that, they got Red Kangaroos, and currently have 5 and one tiny joey in a pouch! I was so surprised by how soft they were!  Unfortunately, I’m a little too nice so I didn’t get as much time to pet or try to feed them as the others, but I did see the joey’s face and my nieces loved it! Totally worth it! 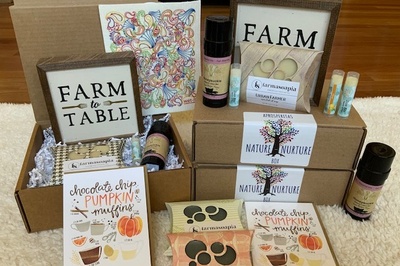 After all of this, we hopped (haha, get it) back onto the trolley and went back to the tour center.  Here we were given small jars with buttercream in them and were told to make butter.  You don’t want to shake it until there’s no liquid left, just until most of it has globbed together. Then we poured out the remaining cream, added water, poured that out, and then we had butter!  And it was good! So good that my mother and I purchased some tubs of butter (not that we made) to take home!

Then we got to try some of the ice cream and chocolate milk!  There was a list of a few different ice creams we could try.  I had coffee, my mother had lemon, my brother and sister-in-law had mint chocolate chip, and my nieces had chocolate. The servings were pre-packaged and not tiny, but luckily they had some smaller ones for the little kids.  We had to buy some to take home as well since it was so good. We got coffee and cookie dough, and then my mother and I split the two so we each could take some of both home. Seriously, its so good!

The price for the hands-on tour was $15/person age 4 and older, and 3 and younger was free. Honestly, I think that the price of $15 to get to milk a cow, feed a baby, and pet a kangaroo was very reasonable.  But then you toss in the making butter experience (and getting to try what you made with crackers), the taste of chocolate milk, and the not so small serving of ice cream, and it’s definitely a bargain.  At the tour center, you can purchase their products including the milk, ice cream, butter, cheese curds, and heavy cream.  They also support many other local businesses, so we were thrilled when we saw they were selling the maple syrup that we get from the farmer’s market (that I was just saying I needed to get more of).

Overall this was a great experience at Hansen’s Dairy Farm.  My nieces, who live near Chicago, enjoyed all the new experiences. Even my mother and I, who have lived in Iowa for 38-40 years each enjoyed it! Since we both live here, we do hope to visit the farm again.  Perhaps we’ll take my other nieces to visit, or perhaps just the two of us will go! If you’re around the Waterloo area of Iowa or willing to take a little drive, I would definitely recommend this 2-hour tour and visiting this farm!

Door County, Wisconsin Travel Guide – When & What To Do